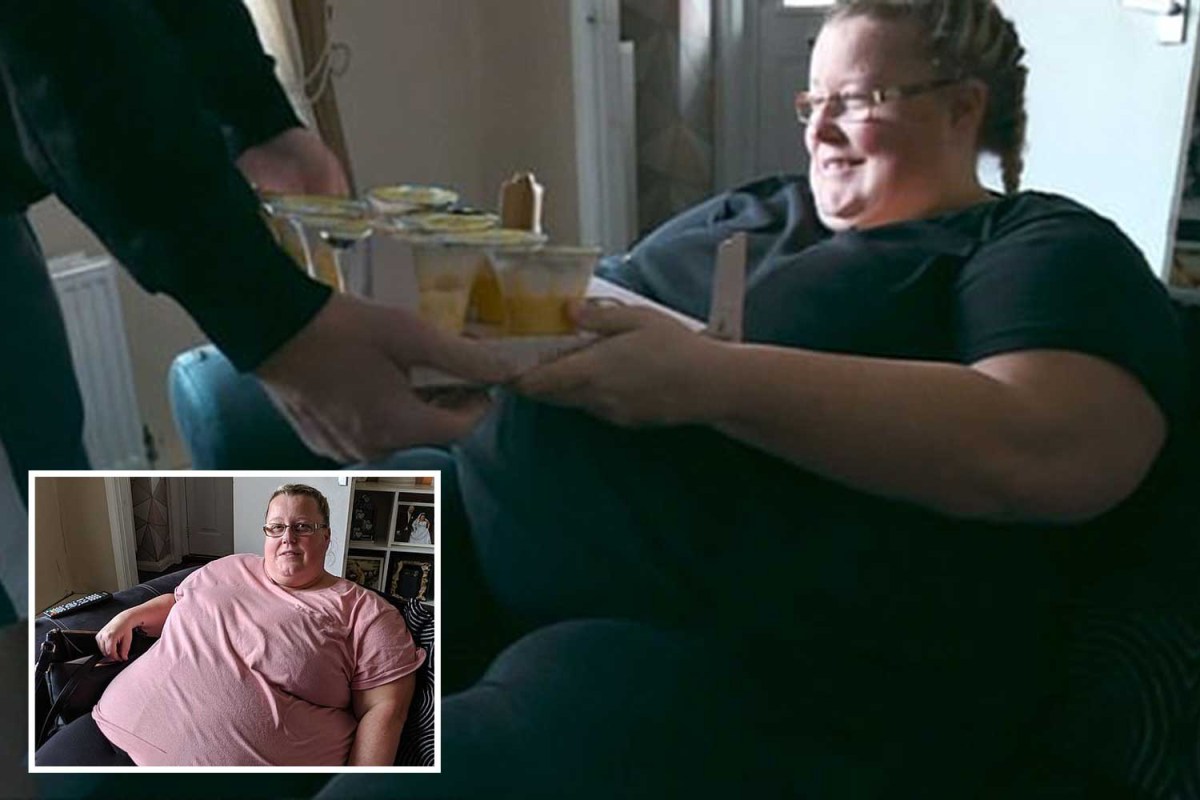 A MUM who weighed over 30 STONE revealed how she used to gorge on 4,000 calories-a-day with her diet of takeaway kebabs and TRAYS of desserts.

Appearing on Channel 4’s Britain’s Fattest People, Samantha, from Hartlepool, explained how she grazed on high calories all day while her husband Keith would cater to her cravings with late night orders.

In September 2019, the 35-year-old mum-of-three – who was classified as super morbidly obese – said she felt too ashamed to leave the house and had shut herself away over the past three years.

“Sometimes I just don’t want to answer my phone, let alone answer the door. Everything is just becoming too much for me now. I’m only 35 but I feel like I’m 90.”

On days when Keith is working at the bakery, Samantha would snack constantly and always ordered a takeaway for lunch.

What’s more, the mum also claims she was addicted to crisps and husband Keith would often give her TRAYS of puddings as well as ice cream comes and chocolates in bed.

Describing how she’d previously been branded a “fat monster”, Samantha continued: “I’m out of control and I wouldn’t be overweight like I am if I wasn’t.”

“I can’t blame my husband or anybody else because I know I did the damage and I put the food in my mouth.”

“Sammy was my first girlfriend and my first love,” Keith said. “I’m there for her all the time – what she wants and what she needs.”

As a result of her weight, Samantha struggled to move around her home and the only time she would ever go out was to visit her mum Julie’s house.

Julie said her daughter never had any issues with food as a child – but noticed Samantha started to pile on the pounds when she split up with her eldest daughter’s father aged 18.

Samantha said: “Food became a comfort for me. It became my friend. The more food I could eat, the better I felt.”

Fighting back tears, Julie said: “It’s heartbreaking. It’s awful to watch my daughter suffering the way she is. It’s an eating disorder, isn’t it?

“Her health is deteriorating in other ways. My biggest fear is having to bury my daughter.”

Food became a comfort for me. It became my friend. The more food I could eat, the better I felt

However, the prospect of becoming a grandmother for the first time is what inspired Samantha to turn her life around.

The mum-of-three also suffered with severe headaches caused by intercranial hypertension which could also be linked to her weight.

After meeting with a surgeon, Samantha was told she needed to lose at least 5kg to have her stomach operated on – which involved reducing her daily calorie intake to 1,000.

As crisps were banned in the household, Samantha said: “My emotions are up and down. It’s frustrating one minute and the next it’s, ‘Come on we can do this.'”

In the first few weeks, Keith revealed that the couple had fought when Samantha “fell off the bandwagon” and had a chicken kebab, chocolates and a few drinks.

However, she turned it around again by restricting her calories to 800 a day and managed to lose an impressive 10lbs in four weeks.

A year later in 2020, Samantha had lost a whopping eight stone – which was nearly a quarter of her starting weight – and dropped from a size 32 to 22.

She added: “I’m absolutely blown away by the weight I’ve lost. It’s crackers.

“I’m changing all the time. It’s not just on the scales you see your victories, it’s how you look and how you feel.”

Vote for your Fabulous Mum of the Year and WIN

Do you know a mum who deserves some extra recognition? We want to pay homage to the best mums in Britain.

During the pandemic they’ve been busy juggling childcare, homeschooling and work, with the added stress of worrying about the health of elderly relatives and vulnerable friends.

It’s never been a harder time to be a mum, so this year it’s even more important to honour the amazing women in our lives.

Nominate her for our Fabulous Mum Of The Year Award and she could win an overnight stay for two at a Champneys spa of her choice complete with a Gold package, which includes four relaxing treatments for the ultimate pampering experience.

Two runners-up will Champneys goodie bag worth £50 plus a £100 M&S voucher and £200 Nutmeg at Morrisons voucher, and all three mums will enjoy a makeover with our glam squad before taking part in a photo shoot for the magazine.

If you want to nominate a mum then fill in the form here.

To enter, upload a photograph of the mum you are nominating and explain why they deserve to win.

The deadline for entries is Sunday February 14 and one winner and two runners-up will be announced on Sunday March 14. Good luck – we can’t wait to hear from you!

TUMBLE OUT OF LOVE

For more real life stories, this woman revealed how she’s in lockdown with her ex, his girlfriend and her new man – and the fights are furious.

And this influencer was savaged after saying coronavirus lockdown in a luxe hotel is a ‘human rights issue’ and ‘worse than prison’.

Plus this mum-of-two claimed ‘weed is getting her through self-isolation’ with her kids – and insists it’s the same as a glass of wine.