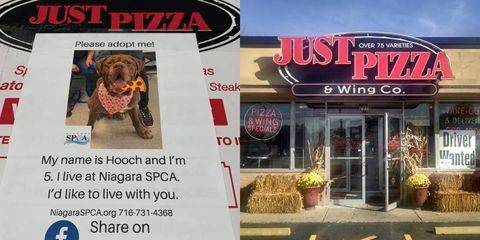 Shelter dogs everywhere need adopting, but getting the pups in front of the right audience can be tricky. That’s why a pizzeria and an animal shelter New York teamed up and came up with a genius solution by attaching flyers of adoptable dogs to pizza boxes.

The Niagara SPCA announced the partnership on Facebook in late February. “We are so excited to share that we have teamed up with our friends at Just Pizza & Wing Co. Amherst, NY Location to help get our shelter dogs adopted!” they wrote. “Be on the lookout for a sweet face on your pizza boxes this weekend! 🍕 🐾” The accompanying photo features a sweet five-year-old dog named Hooch who appears to be legit smiling for the photo. A piece of pizza is hilariously Photoshopped near his mouth.

The flyer also gives a number to call to adopt the pup and encourages pizza (and dog) fans to share it on Facebook.

Apparently the partnership took off, because the Niagara SPCA updated its post with a special deal. “Just Pizza is so grateful for everyone’s support for the shelter animals that they have decided to offer an awesome incentive for those who adopt a dog from the pizza box flyer! Upon adoption, present your flyer to Niagara SPCA and receive a $50 gift certificate to Just Pizza in Amherst,” the organization wrote.

Just Pizza owner Mary Alloy told CNN that she and an SPCA coordinator came up with the idea together. “We are all animal lovers here, so I got permission from the franchise to do it and immediately got to work,” she said. People are “absolutely loving” the partnership, Alloy said, and noted that a six-month-old puppy named Larry was adopted just a day after he appeared on boxes.

Alloy said her pizza shop is also getting more business than usual. The restaurant typically uses about 600 to 800 boxes every week, but it’s already gone through 500 boxes since Friday, she says.

Has Hooch found his forever home yet? Because someone should get on that right away!!