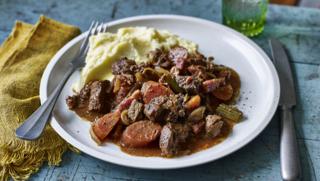 The larger the joint, the better it is for a traditional British roast. Choose a joint from the back, ribs, fillet or sirloin. Traditional roasting cuts are the forerib (known as rib of beef) or sirloin. Leaving in the bone adds flavour, and bone is a good conductor of heat so the meat will cook more evenly with the bone in. However, a boned and rolled cut is easier to carve.

To be sure your meat is cooked you can use a meat thermometer. There are two varieties available – one you insert in the thickest part of the raw joint and cook until the desired internal temperature is reached. The other is inserted into the cooked joint after roasting. Recommended temperatures for beef are: Rare 60C; medium 70C; well done 80C. Baste the meat with the juices at least three times during cooking. When it’s done, take out the meat and leave it to rest for at least 20 minutes. This enables the joint to re-absorb the delicious juices that have bubbled up and makes it easier to carve.

Brisket, thick flank, topside and silverside are all good cuts for braising or pot-roasting. The meat is usually dusted with flour and fried first to brown it, then placed on vegetables and herbs; stock is poured in to cover the meat. It’s then cooked on a gentle heat in the oven with the lid on. The meat and vegetable juices combine to make a delicious sauce.

Stewing or casseroling is best for cheaper cuts that need long, gentle cooking such as shin and leg, brisket, chuck and blade, neck and clod and skirt. Many supermarkets sell packets of “stewing steak” that’s likely to originate from the tougher cuts and which need longer cooking than cubes of “braising steak”.