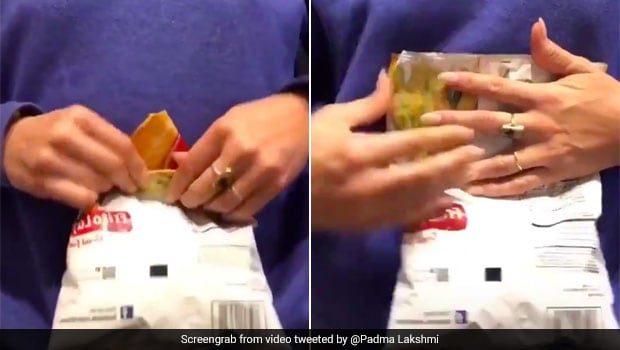 Padma Lakshmi’s viral hack to help in resealing a bag of chips.

Whenever at home, eating is like second nature to us. We often find ourselves standing in front of the cupboard where all the snacks are kept, reaching out for a bag of chips. The struggle that most of us encounter during this activity is resealing the bag of chips once it has been opened. The chips often tend to go stale or moist in the process, thus leaving us no option but to finish the entire packet in one go. Well, guess what? This won’t have to be the only way out of eating a bag of chips. Television Show host Padma Lakshmi has devised an intriguing technique of resealing the chips packet when you’re halfway through it. Take a look at the video she shared on Twitter:

How am I just finding out about this now? pic.twitter.com/kOOWqRyQkN

(Also Read: Want To Chop Onions Quickly Without Tears? This TikTok User Has The Perfect Hack)

The video has gone viral, garnering 10 million plus views and getting over 3,00,000 likes and 85,000 retweets. Padma Lakshmi herself demonstrated the technique of resealing the chips packet, which is actually quite simple. She first folded the top corners of the packet inward, making it a triangular top. Then, Padma Lakshmi proceeded to roll up the corners she had just folded. This made a tiny gap such as that in an envelope. The entire conical top was then rolled down, thus making a firm seal without any chance of the bag reopening.

Netizens poured in their reactions to the viral video. While some said this hack was a gift to mankind, others didn’t think it was anything special. Some Twitter users agreed that they would need this hack specially during times of lockdown when saving chips and snacks was important. Other users said that they wouldn’t go through with this technique as it was too much effort. Take a look at the reactions:

We did not feel the need to ration and save chips in the pre-quarantine days.

I would have to go with clothes pin. pic.twitter.com/mNVj0GoE8B

Who has that many left in a bag?

I’m not about to do all of this shit

I’m sure this will be like the t shirt thing that I will never be able to replicate.

I got lost on step 3 pic.twitter.com/znC3JRwSTS

I hate the internet. pic.twitter.com/4JbVQGvFd0

What do you think of the hack? Tell us in the comments below!