Microsoft Excels New Cake Layout Has Got Twitterati Drooling. Seen It Yet? 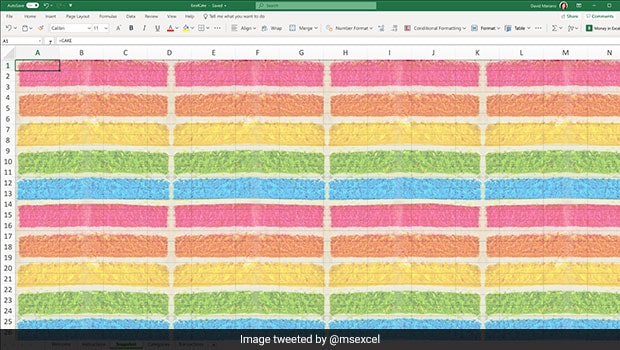 Microsoft Excel shared their own version of a new cake feature on Twitter.

Several bizarre food trends have emerged in the lockdown, thanks to people having extra time on their hands. Whether it is inventing new dishes or giving a new shape to old ones – there is no end to creativity when it comes to food. A video recently went viral on social media featuring cakes made to look like everyday objects. The cakes looked uncannily similar to household items such as toilet paper. The video got hilarious reactions from people, who tried to cut the items in their homes with a knife in the hope that they would turn out to be cake. Take a look:

Why is everything cake now!? It’s confusing ???? pic.twitter.com/yxNjmcyRCj

There were a number of reactions to this delicious cake video on social media. However, one particular response caught our attention. Microsoft Excel took to Twitter to share their own version of cake video trend and the tweet surprised netizens. Check it out:

Anyone else had a chance to try out the new =CAKE function in Excel? pic.twitter.com/pq0Ez8zTM6

While many users got excited about the feature, Microsoft later clarified that the feature was just a figment of their imagination and not an actual update to MS Excel. However, this didn’t limit Twitterati’s enthusiasm as to what the feature could do. Take a look at the reactions to the tweet:

*Important Disclaimer about the =CAKE function*

As much as we love cake, your spreadsheet will not actually become cake by using the fictional =CAKE function. ????

I wish it was true. That would be so cool.

as much as i believe your disclaimer @msexcel , im still gonna cut my screen when i open excel either way.

Sorry that so many people didn’t get this delicious tweet.

@msexcel – please get me a =COFFEE function ASAP… I promise , I’ll use Excel even for writing stories ????

(Also Read: Twitter Thread With Rihanna As Indian Food Has Struck Gold On The Internet)

Even though the feature wasn’t real, we couldn’t help but wish that Microsoft Excel added a little more food to our regular sheets. Maybe we could start a petition to bring in some deliciousness into Excel? Tell us in the comments below!