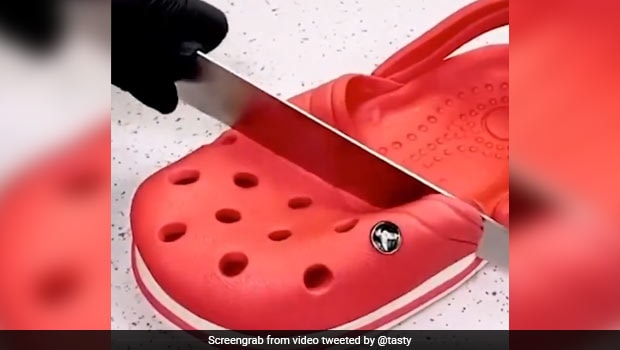 Wait, What? That was a cake? This is how you’ll react, just like everyone else, when you’ll see this video. A rather talented chef made cakes with an immaculate resemblance to everyday objects that could fool anyone, not just you. We all have seen cakes made to look like things like dolls, stuff toys, even balls and bags, but never those looking like shoes, toilet paper and vegetables. That’s what these bizarre cakes are – odd yet funny. So, when the video of cutting these objects (err, cakes) went viral, Twitteratti had its strange reactions to it, which we oddly found hilarious.

But, first, let’s see the viral video of the cakes that confused, and later, amused the netizens. (Spoiler alert: You won’t be able to control your temptation after the cakes are cut.)

(Also Read: Do You Know This Hack To Peel An Onion Without Hassle? Check Out Viral Video)

These Are All Cakes pic.twitter.com/ejArkJHaid

Did you creep out? Well, you shared the same thoughts as most of the people who saw this viral video and their reactions will leave you in splits. While some were impressed, others found it funny. Some people took to actually cutting real objects and commenting ‘Please advise, it’s not working for me”, “got a paper cut and found out I’m a cake”, and “I will officially be cutting people to make sure that they too are not a cake”.

(Also Read: Viral Baking Hack: How To Soften Butter From Fridge Without Melting)

Pls advise, it’s not working for me. pic.twitter.com/wd61wCeUGT

Then some people decided to test their baking skills and made cakes looking as realistic as the objects they were meant to imitate.

toilet paper is having a great year pic.twitter.com/xU70TplOXy

About Neha GroverLove for reading roused her writing instincts. Neha is guilty of having a deep-set fixation with anything caffeinated. When she is not pouring out her nest of thoughts onto the screen, you can see her reading while sipping on coffee.