For a quick weeknight meal or a weekend lunch with a slight kick, this fun dish stars Momofuku noodles and flash-grilled short rib kalbi. It’s a happy marriage between Taiwanese and Korean, and it’s absolutely lovely.

We all know that feeling of being completely lost, without any idea what to cook for dinner. Usually, the lack of ideas comes paired with lack of time – so having a couple of simple 30 minutes dishes ready to go at a moments notice is a great way to cut yourself some slack, while at the same time keeping the family happy and well-fed. This is one of my favorite go-to dishes when I find myself in that familiar situation.

Chef David Chang and the crew behind Momofuku launched their first ever line of noodles back in 2021, and they quickly became a great go-to source for quick, delicious meals for a lot of ambitious home cooks that would otherwise frown upon anything that could be perceived as “instant”.

One of the main reasons for that, is that unlike many other noodles on the market, Momofuku’s noodles are air dried, never fried or frozen. They are made only from wheat, salt and water, have no artificial flavoring or preservatives, and pack about 10 grams of protein per serving.

Essentially they are “better for you”, “better tasting” versions of the cheap supermarket instant noodles we all know (and honestly, sometimes love).

The reason I’m obsessed with these noodles, is that they are ultra convenient to whip up whenever creativity fails, but you can also build them out with toppings and sauces that you love if you feel like upping the ante a little and make them even more exciting.

In the current Momofuku Noodle line-up, you can choose between three pretty great flavors. 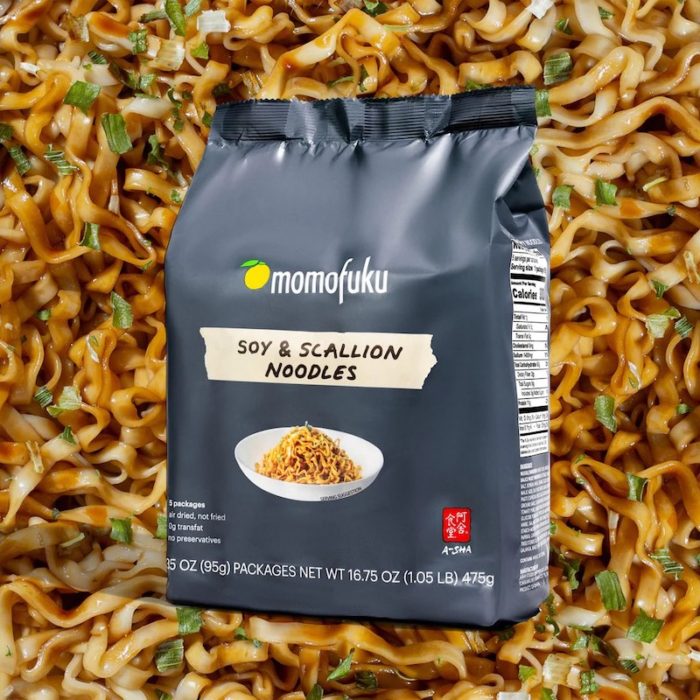 Soy & Scallion Noodle
A base of soy sauce and sesame oil creates the perfect balance of salty, sweet, and savory flavors. 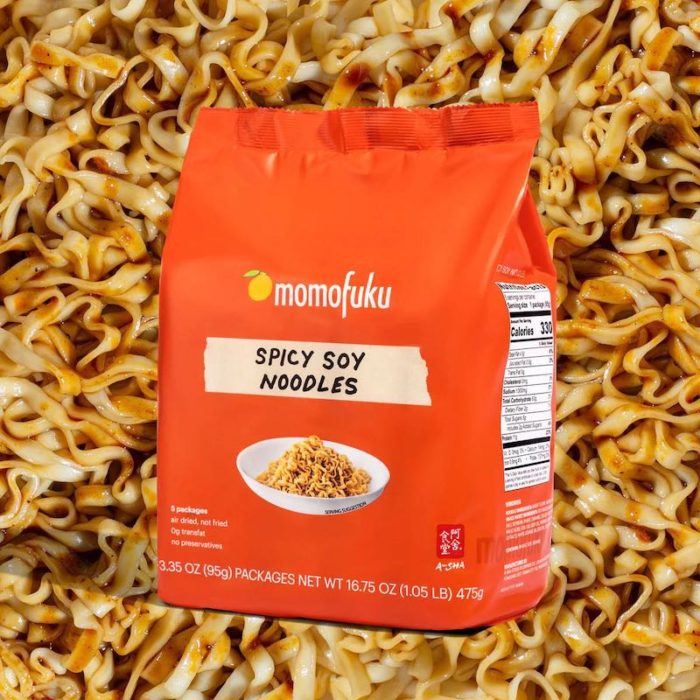 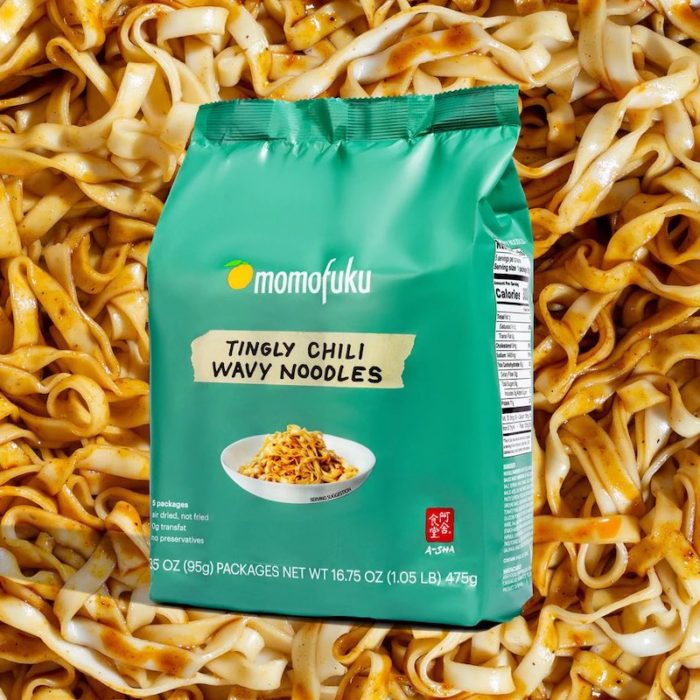 Now, today, we’ll be cooking with those last ones – the tingly wavy noodles. They come individually packed in portions, so if you are two persons – you’ll just break out two packets. Inside each packet you’ll find the noodles, as well as a small pouch containing the slightly spicy sauce. Unlike instant ramen noodles, you won’t add this pouch to the water – but rather mix it into the noodles after boiling them. For some of the flavors, there will be more than one pouch – but the tingly wavy ones just have one. 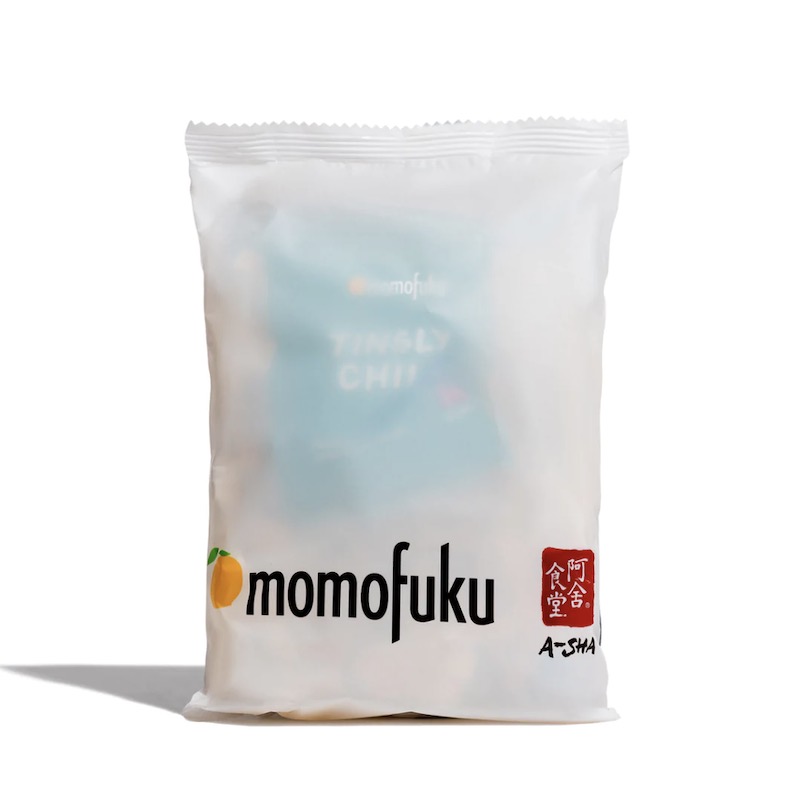 This is where you can take your simple noodles, and turn your dish into a restaurant quality experience. Whatever you have in your fridge, and whatever your heart is set on works well.

SUGGESTED PROTEINS
– Grilled chicken thighs, marinated in oyster sauce and grilled until crispy, then thinly sliced.
– Grilled prawns, dusted with garlic powder, and mixed with Korean Gochujang chili paste.
– In this recipe, I chose some marinated short rib kalbi – the thin, Korean boneless rib that you grill over very high heat until it crisps up on the surface and still keeps the sweetness from the marinade. I find this works so well with the flavors of these noodles.

SUGGESTED VEGETABLES
– Thinly sliced carrots, flash cooked in a wok, always a great way to add a little bit of texture to your noodle dish.
– Sliced mushrooms, adds umami flavors and kicks up the nutrition level.
– If you feel like you want to spice things up, add some finely chopped jalapeño to the final dish.
– Here, I’m using thinly sliced red onions and top the final result with some sliced scallion.

MARINADE
– You can absolutely make your own Kalbi marinade – here’s a great recipe – but we’re going for a quick fix today, and I’m using store bought Korean BBQ sauce as a marinade for this dish. I’m not ashamed of it!

So basically, we’re talking about a recipe with just a handful of ingredients (unless you make your own Kalbi sauce of course), and this makes dinner prep easier than almost anything. 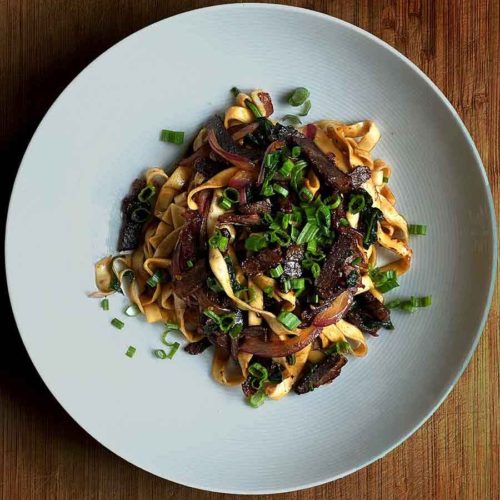 A quick weeknight meal that packs a punch. Featuring Momofuku noodles and grilled Korean short rib, this is sure to become your go-to dinner when you don’t have time for hours of meal prep.

Kalle Bergman is a food writer and media entrepreneur who is the founder of Honest Cooking. As a food writer, his writing has been regularly featured in publications like Gourmet, Los Angeles Times, Huffington Post and Serious Eats. He is obsessed with simple food, more often than not from his native Scandinavia.