Journey In The Search Of Kanchipuram Idli, A South Indian Delicacy 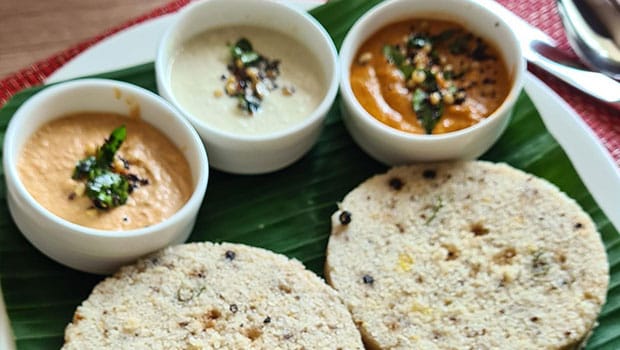 Kanchipuram idli is popular in Tamil Nadu and other south Indian states.

Chef Arokyadas at the Welcomhotel GST Road Chennai is a reticent, almost old-school chef. At a time when chefs across India are enjoying their long overdue moments in the spotlight, he’s a chef who prefers to let his food do the talking. The Pallavas, the same dynasty that constructed Mahabalipuram’s UNESCO-recognised World heritage shore temples used to lord over much of the area around this hotel. It’s now one of the world’s automobile manufacturing hubs. It is a 50 sq.km centre of excellence that’s home to some of the world’s best known car brands from BMW to Ford to Hyundai. It’s also at this hotel that I began a fascinating food trail that took me back to Kanchipuram, the erstwhile capital of the Pallavas and in search of a dish that some local legends suggest dates back to their reign.

I set out on the one-hour drive to Kanchipuram before sunrise and my first stop was the Varadharaja Perumal temple. Kanchipuram is among India’s oldest continuously inhabited cities and was once called the city of a thousand temples. The Varadharaja Perumal temple is among the imposing temples in Tamil Nadu and made national headlines in 2019 when devotees from across the world thronged the temple for a glimpse of Athi Varadhar statue.  The 12-feet tall Athi Varadhar statue is immersed at the temple tank – Anantha Theertham, and taken out for just 48 days every 40 years (last done in 2019). The Kanchipuram idli is the other star attraction at the temple and you don’t have to wait for 40 years to sample it.

Temple food is a big part of the overall experience of visiting many temples across Tamil Nadu. From the Sakkarai (sweet) Pongal at the Parthasarathy temple in Chennai to the panchamirtham at Palani, many temples are strongly associated with their prasad or offerings to the presiding deity. The identity of Kanchipuram idli has long been linked to the Varadharaja Perumal temple. After visiting the temple, I met Sudha, one of the two home cooks in Kanchipuram who makes these idlis on order. She tells me that this flavourful idli might even date back to the Pallava era (6th to 9th Century AD). I’m unable to watch the intricate process that goes into making this idli since both home cooks only make this against orders. Sudha suggests I head back to the temple to try the idli. 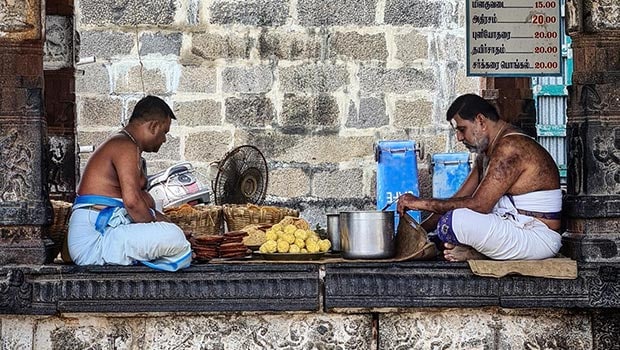 I’m back at the Prasadam (temple food) counter at the Varadharaja Perumal temple and I am overwhelmed by the sheer size of the idli (almost 1 1/2 foot tall). The cylindrical idli is wrapped in a traditional Mandharai leaf (Bauhinia Creeper) that also lends a unique flavour. It takes an industrial like precision – that’s found in many of the automotive plants in the area, to make these idlis. Sudha tells me how the batter is poured into a neatly wrapped mandharai leaf and then placed in a basket inside a tall brass cooker. The idlis are steamed for almost three hours. It’s not just the cooking process, it’s also the ingredients that set this idli apart. While the batter is quite similar to a conventional idli, it’s the seasoning ingredients that include sukku (dried ginger), peppercorns, cumin, asafoetida that define the flavours. It’s also the coarse texture of the idli – it’s almost the same grainy texture of a rava idli, which is unique. 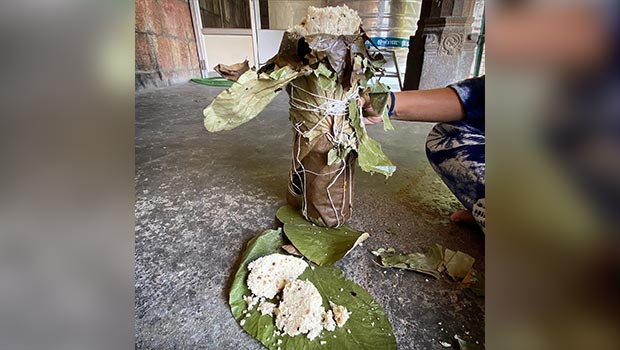 There are quite a few restaurants like Sri Saravana Lunch home in Kanchipuram that serve this local delicacy. But not all restaurants serve it on all days and round the clock. I’d still suggest trying the temple version (It costs Rs. 400) although it’s quite large even for a family of four. The traditional packing – wrapped in the leaf, means that you can carry it back home. The idli has a shelf life of two days and the staff at the temple urged me not to refrigerate the idli.

Once I was back at the Welcomhotel GST Road, Chennai, I checked out Chef Arokyadas’ version that was quite close to the idli I tried at the temple. I discovered slight variations in the recipe of Kanchipuram idli – some restaurants add cashew nuts to the idli for instance, but the key is the slight sourness that complements the spices in the mix. And that’s the flavour that took me straight back to my childhood when I enjoyed my mother’s authentic version of this emblematic dish without any chutney or idli powder (aka gun powder). You can try making it at home -you don’t need the large brass steamer for this recipe! 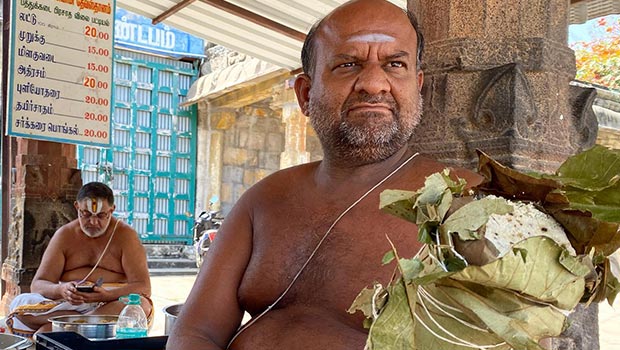 Kanchipuran idli is slow cooked or a long time to infuse the flavours.

Method:
Wash and soak the raw rice, parboiled rice, urad dal and fenugreek seeds in water over night. Drain the water and grind the mixture to a slightly coarse paste. Add up to a cup of water for grinding and grind the batter in batches in the mixer. Do not add too much water while grinding.
Soak the poha for 10 minutes in half a cup of water. Grind it to a smooth paste and add it to the batter.
Heat ghee in a pan and add in the crushed cumin pepper mixture and curry leaves. Once the curry leaves are crisp, switch off the flame. Add in the dry ginger powder and asafoetida. Toss well and add it to the batter.
Add salt to the batter and mix everything well to combine. Cover the pan with a lid and allow it to ferment in a draft free place for 8-10 hours.
Steam the idli for 20 minutes. Serve with chutney, sambar or idli powder.