McDonald’s Chocolate Pie Is Stuffed With A Molten Chocolate, So Catch Me At The Drive-Thru 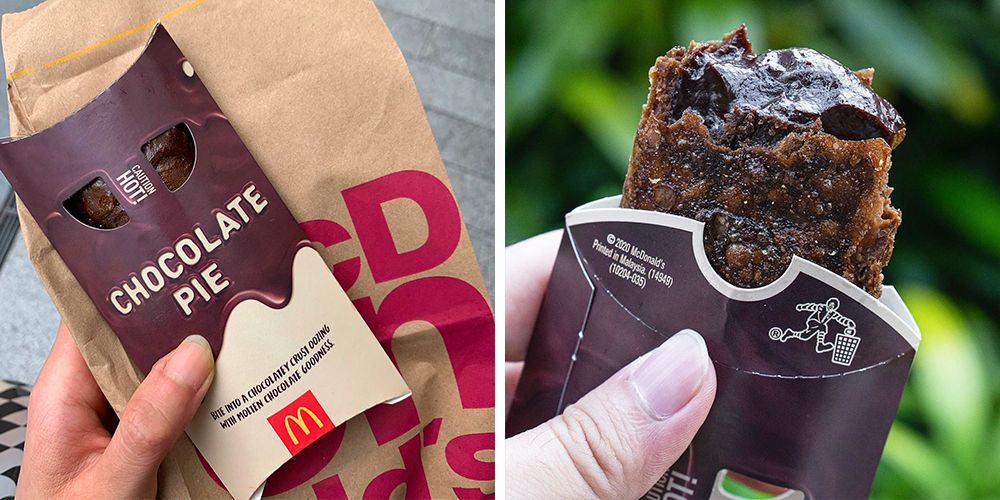 As if we weren’t already jealous of the popcorn caramel soft-serve ice cream in McDonald’s Singapore, now we have another dessert to lust after. The international chain has added a Chocolate Pie to its dessert line-up, and we wish our taste buds worked through the screen.

The Chocolate Pie is made up of a chocolatey crust and is stuffed “with molten chocolate goodness,” as it’s described on the sleeve it comes in. So if melted chocolate encased in chocolate carbs sounds like your kind of bite, maybe now is the time to figure out a way to get this delivered from the other side of the world (and then let us know the secret).

McDonald’s Singapore recently announced that the Chocolate Pie was returning to restaurants. That means the clock has already started ticking on when it will disappear, since there isn’t any indication that it’s sticking around for good this time.

Not to make matters worse, but it looks like we’re really missing out on a great dessert over here in the U.S. “I must say, this is really one of McDonald’s greatest inventions,” one person captioned their photo. “It’s RICH, but not too sweet, which I love!!” wrote another.

This pie is bringing back memories of when we found out that McDonald’s Malaysia just released a Cookies & Cream Pie made with Oreo cookies. Sadly, it looks like we’ll just have to be satisfied with the Baked Apple Pie … for now.

Caitlyn Fitzpatrick
News & Trends Editor
As the news & trends editor, Caitlyn covers the tastiest, coolest, and strangest products for BestProducts.com, as well as runs Best Products’ social handles; her work has also appeared in POPSUGAR and InStyle, among others.